Next week's sermon: Was God...black? 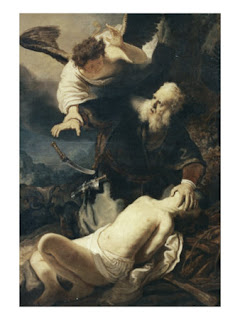 And now, a Sunday sermon on Abraham

Abraham, was he really that faithful?  Why such blasphemy, you may ask.  Well, let’s address the bible story in which Abraham takes his son, Isaac, to the top of a mountain for sacrifice.  I ask, is it not possible that Abraham went along with God's directive to have Isaac sacrificed because in his mind was the unspoken thought, "I'm probably not the father, anyways"?  (Hear me out here- In those times when the world did not have Maury Povich to announce “You are NOT the father”, surely we can understand the possibility of such a doubt?  At the time of Isaac's conception, Abraham was 5,503 years old.  (No, really).  Plus, Sarah had been shown to be bitter about the chicks on the side (that she mostly pimped to him, granted (citation pending)).  And then how random that two guys claiming to be Angels (uh huh) would show up and crash at the pad and then a few days later the lady becomes pregnant!  Oh yeah, Abraham had thoughts.)

Moving along, the second point I need to make is, have we ever considered how fucked up it must have been for Isaac, thinking he is going on an animal-sacrificing excursion with the dad, only to be tied up and lain on top of twigs once they arrive at their destination?  To then watch with fear as his “father” raises the knife, aims for his throat, only to stop in midair, looking at the skies (this is when God has interfered- but as we all know, God only talks personally to people and nobody else hears- but to Isaac, his father is taking a break prior to killing him), then turning around observes aloud, "Oh, there's a lamb."  Isaac is then untied, the lamb is killed instead, and then they both head home afterward.  The question becomes:  Had senility kicked in or was Abraham so one-track minded and practical he decided since God was late on providing a lamb, they might as well kill Isaac so he will come home in time for supper?  Poor Isaac, he must have been traumatized beyond words after this.

So the lesson today folks is that Abraham wasn't that faithful, just a lousy father.
Posted by oogie at 7:41 AM