Most of your friends don’t care that John and Jane Smith got married. 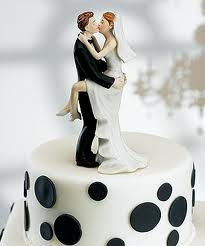 And a Facebook-related one, at that. So I ask, what on earth is the purpose of posting an album of a wedding you attended to your Facebook profile that is private to all Facebook users but your Facebook friends?

I missed the wedding of my friend, Amanda, this past weekend. One of her friends in attendance posted the album to her Facebook profile and had the album’s accessibility limited to her friends. Not even the “Friends of Friends” could view the damned album. Amanda’s friend has, perhaps, THREE friends in common with Amanda. So Amanda’s friend gets to naturally select which three of Amanda’s friends get to see Amanda’s wedding. Like, for serious?

A few things, dear Amanda’s friend (and all of you Facebook users who do this crap), most of your 1,428 friends do not care that Amanda married the guy she met playing beer pong after a wet t-shirt contest during Mardi Gras (or was it the guy she met after cheating on Mardi Gras guy?). But Amanda’s friends do care to see that she got married. I get the need to keep certain things about YOUR life limited to YOUR friends. But this Facebook album about AMANDA’S wedding has, maybe, ten pictures of you (unless you’re a narcissistic and self-centered sh*t, as well) so perhaps you should keep the album public to “Friends of Friends” so that friends of Amanda who actually give a crap about HER life can see HER wedding. (Unless you’ve doctored the album to superimpose your face on her body, then I totally understand).

And for the record, I’m not hating. Just pissy.

Posted by Piglet in Wellies at 5:12 PM No comments:

Or maybe he just likes the taste of his foot. 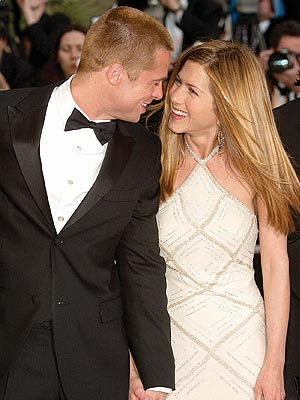 It seems that every news outlet has been reporting about Brad Pitt’s super insensitive comments about his ex wife, the human American Apple Pie, aka Jennifer Aniston. These comments primarily center around his statements blaming his marriage to American Pie for the fact his life was boring and blah and blah. Usually, I avoid most Brad Pitt-related news since dude is as boring as clay, but I have been following this story with some sort of perverse pleasure.

Why? For the past seven years, only two people suffered for the shitty way HE ended his relationship: He cheated on American Pie, dumped her publicly and immediately after, he starts dating the Anorexic Vampire with whom he adopts a brood of United Nations- sanctioned kids, and then proceeds on a public path to canonization. All that dude needed was a litter of puppies for the image to be complete. Anyway, no one ever EVER castigated Brad Pitt but American Pie became the old maid, the bitter and miserable female, etc. etc. AND! People dumped on her each time she said something as innocuous as, “I’m single”! And as much as I disliked the Anorexic Vampire, she was always the other woman even though it takes two people to create the “other woman."

So there you have it. Brad arrogantly assumed that enough time had passed because, you know, people love the heck out of him (I mean, are there not a million and a half articles about his awesomeness and that of the Anorexic Vampire and their children and doesn’t everyone just LOVE a woman who can’t get enough of being a mother? And what vial of blood talkest thou of?) . And with this incorrect assumption, he decides that “oh, I now can be honest about my love.” No, em-effer, you can’t be because the foundation of your love is gross and, yes, disgusting. Jen’s very famous statement “a sensitivity chip is missing” stays relevant. The tide is turning, and people finally are beginning to dislike him. Took them seven years but FINALLY, subconsciously, people are now disliking him. Don’t let it ever be said that we only bash the Anorexic Vampire.

Side note, weren’t they gosh oh so darned cute together?!

Posted by Piglet in Wellies at 5:06 PM No comments:

After a two-week trip to Japan where she admittedly spent most of the trip gorging on the various delicacies of the country, Piglet returned to the U.S. with a seemingly permanent food hangover that prompted a 5 day tester of the Raw Food Diet.  And as the following email exchange on day 2 shows, well, she didn't quite make it:
Wednesday, September 21.  10:00am
Oogie:  How’s it going?
Piglet:  Wonderful.  I feel hungry, but my insides feel clean, you know?
Wednesday, September 21.  12:37pm
Oogie:  How’s it going?
Piglet:  Quite well.  I’m thinking I should have a bison burger for lunch
Oogie:  …wha?
Piglet:  LOL, kidding! Like, LOL.
Oogie:  Heheh, LO..right
Wednesday, September 21.  4:11pm
Piglet:  Is Mayo raw?
Posted by oogie at 6:53 PM 1 comment:

Columbine WAS in Guam, after all.

Yesterday, a gunman opened fire in a Nevada IHOP, wounding seven and killing four. Speaking to authorities (and the media) about the shooting, Ralph Swagler, American extraordinaire, says, "This happens in third-world countries, not here."

Well. He is only ½ Kenyan, after all.

Uhm... Obama has some small feet: 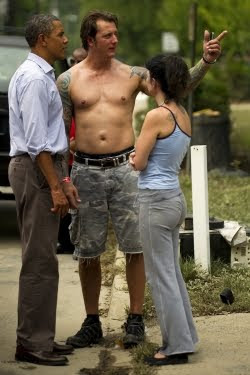 And you know what they say about feet...
P.s., put a shirt on! That's the President for sh*t's sake.
Posted by Piglet in Wellies at 11:07 AM No comments: