The Morning After Pill- A Weapon of Mass Destruction

On April 30, 2013, the Food and Drug Administration (FDA) reduced to 15 years the minimum age of over-the-counter access to emergency oral contraceptives, a/k/a the Morning After Pill.  This move, which does not conform to the recent ruling of U.S. District Judge Edward Korman of New York that overturned the Obama Administration’s minimum age requirement of 17 years, has set off the usual firestorm of debate on the appropriateness of the Morning After Pill and its availability to minors.  I thought I would throw my hat in the ring to address some frequently asked questions or comments on the Morning After Pill.

1.  Children should ask their parents for permission prior to purchasing the morning after pill.
We’ve all heard the comments that “my child knows better” and “I would never judge my child” and “I would make sure that my child knew there was always a safe place for her to discuss all matters involving her sexuality.”  I am sure that most, if not all of us, understand the need for parental involvement or supervision when children are making certain decisions.  Unfortunately, reality is such that not every child has a safe space (or an adequate support system) to discuss the near-inevitable issue of her sexuality.  We live in a country that has created a taboo culture around the topic of sex, so much so that a child often believes that addressing her sexuality and the hormones naturally tumbling within her is off-limits.  There are also those children being raised in homes that may have religion-based values prohibiting pre-marital sex, much less discussed.  Then there are those children that do not have a safe space because they are living a nightmare where the counterpart to their sexual experiences is their father, uncle, brother, or cousin, and a rapist.

Taking a step back, it is important to acknowledge that teenagers are notoriously wary of authority and are wary of the potential for “punishment” for even the most mundane things; therefore, it is unquestionable that they would feel the same way about discussing their sexual activity with their parents.

Furthermore, has anyone taken a look at our rape culture or the tendency of our society to blame the victim and ask questions later?  No? 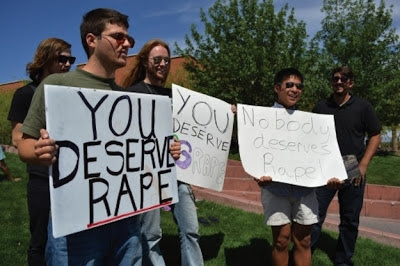 Yes, I’m pretty sure any child born to the above asshole (at a Take Back The Night Event, mind you) would feel comfortable coming to her parents for help.  Children need safe and educated options and, sometimes, those options cannot be their parents.

I will also advance a potentially controversial point:  There actually is something to be said for having a healthy fear of one’s parents.  Too often, we see children not quite understanding the concept that parents are there to be parents and not to be your friends.  Perhaps it IS okay that your child is not comfortable coming to you to discuss their sexual habits or discuss that she decided not to use a condom with her boyfriend/sexual partner the night before.   What is not okay is that you have not educated your child enough to teach her that there are places such as Planned Parenthood at which she could get some guidance on preventing STDs and unwanted pregnancies, or that you failed to teach your child about contraceptives such that there shall be no need for emergency contraceptives.

3.  Abstinence-only programs are a safer bet than making the pill available to 15 year olds.  Abstinence-only programs have proven repeatedly to be complete and total failures.   Teenage pregnancies, which overall remain at historically low levels, appear to be at their highest in States espousing abstinence-only programs.  Finally, contrary to oddly-popular opinion, providing the Morning After Pill to teenagers shall not destroy the girl, and shall not lead her down a guaranteed path of promiscuity, force her to drop out of high school, and etc.  Do you know what would guarantee a changed life for her?  And almost always not for the better?  A teenage pregnancy.

4.  Boys will now force unwitting young females to take the pill.  This is the most common and frequent argument I have heard against the decision of the FDA.  Except, we’re forgetting something:  This is not a date rape drug.  Where both parties are consenting, it is likelier that both parties shall be making this decision together.  If you have a non-consenting girl, then I shall go out on a limb and say that you have bigger problems than whether or not a boy slipped the Morning After Pill into a girl’s drink.

5.  Is it not likely that girls will end up abusing the availability of the Morning After Pill, using it inappropriately as a birth control device, and taking it 3 times or more per month?  A couple of things: (a) I strongly urge you to retake Freshman biology, and (b) the Morning After Pill is actually $50 per month- short of a child having access to one heck of an allowance (or other illegal and/or non-sanctioned cash flow), may I guarantee you that this will not be the case and shall be likelier a last resort?

6.  We have regulations for things from buying alcohol and cigarettes, to driving, etc. Why is it a big deal that we regulate the access of kids to the morning after pill?  See #1 above.  Please let me know the last time that your teenager came to you and said, hey, mom, I am going to Justin’s house to have sex.  Teenagers do not ask for permission to have sex and this is the reality.  Provide them with as many safe options to protect themselves.

One does not read this blog without knowing that I am a fierce and unapologetic advocate for all matters involving the rights of women, especially when it comes to reproduction and our sexuality.  When the Morning After Pill became widely available, I recall “abusing” its availability.  At least twice (three times?) in one year, I purposely did not insist on a condom with my then sexual partner because I knew I had the option of the Morning After Pill.  I share this anecdote because I am not writing off the possibility that teenagers may get comfortable and may become more reckless than usual.  However, similar to my subsequent and very rapid education that the Morning After Pill really was not a form of birth control, I have quite a bit of faith and comfort that the “abusing” teenager quickly will learn the appropriate uses of the Morning After Pill.  In the end, the job should be about educating the sexually active on the appropriate contraceptives so as to prevent the need for an emergency contraceptive.

9.  And finally, tying back to No. 1 above, my child is an angel and knows to come to me.  Go check your teenager’s bedroom.  Yes, that’s her bed sheet hanging out the window.  And yes, that’s Brad’s corvette parked down the block.